Hoi An to Hue by Private Car

Beside Danang, Hoi An, Hue City is also a destination not to be missed when you travel in the Central Region. From romantic Hoi An to Hue, if you don’t want to miss the beautiful spots on the road, you should choose a private car 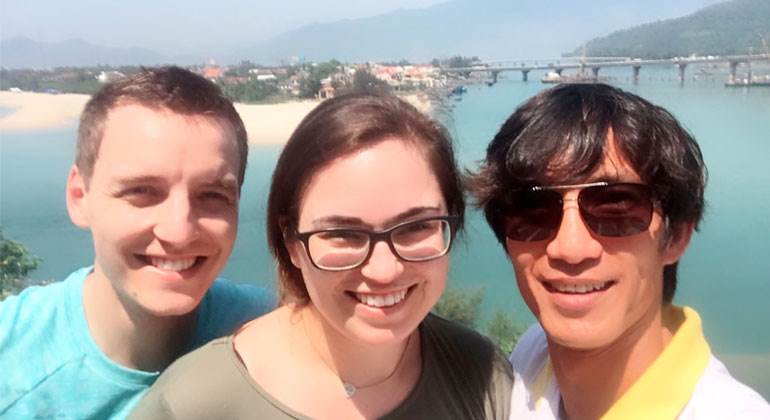 The distance between Hoi An and Hue is 123 kilometers which is more or less 3 hour drive with a private car via Hai Van Tunnel. Unlike taking the bus or taxi, private transfer allows you to depart on your most convenient time and enjoy full day sightseeing along the way.

There are several places to visit along the way from Hoi An to Hue. Hoi An Private Cars give you the freedom to choose the places you want to explore a little more. Among the recommended stops are the following:

We can help you!

Need help from us? Feel free to call us.

Want to meet and talk Directly? Find us here!

What are the additional charges?

All prices presented are inclusive of the car, professional driver, toll fee, fuel and a bottle of water.

Is there any facility for child seat?

Due to child seat being mandatory, we do provide child seat facility though you must make a request in advance, at the time of booking.

I have an existing quote and would like to convert it into a booking.

You can get in touch with our support team via chat, call or email anytime to finalize your booking.

I need to amend my booking.

You can amend the booking quick an easy with our support team available 24/7 via chat, email or call.

What services are included in my car rental booking?

It includes an English Speaking Driver; 24/7 chat, email or call support; toll and airport fees and charges; Door to door service; free Wifi on board and bottled water.

How can a person get in touch with you?

In order to get in touch with us, you can chat, email us at johnnykhanh.global@gmail.com or call us at any of the given numbers on the website.

How can I find my driver?

All drivers wear our company uniform and will inform your hotel reception upon their arrival. The booking confirmation email also states information regarding pick up location, time and date of your rental. In case you are still not able to reach the driver or locate the office, you can anytime get in touch with our support team via call or email.

When do I make a payment for my car?

You may pay cash to the driver directly after the transfer. In case you prefer to pay with your debit or credit card, please inform us in advance so we can arrange your stop at our office.

Me & my friends booked a private car for a day trip Hoi An yesterday. Danang private taxi offered me a Toyota innova, which was a clean & comfortable car for us. We had an enjoyable time with driver as well.

We were so happy to choose right service, Driver man very friendly, enthusiasm, and also can speak English. he took us to many nice place, and recommend cheapest and the best restaurants…

Woman who organised was friendly and caring, taxi driver drove slowly (as we requested) and the picked us up/dropped us off hotel to hotel. Fully recommend this service.

CAR RENTALS – IN CENTER OF VIETNAM!